Today was my birthday, Annie had agreed to take me out, we had decided some time ago that we’d treat ourselves to a slap-up meal at an up-market restaurant somewhere on our birthdays. Originally, I wanted to try out what I considered would have been a suave restaurant in the recently built Mahanakhon Tower, but I was jumping the gun a little as it wasn’t due to open until 2018. Still the same I thought that this Ritz Carlton building would have been a delightful place to have dinner at.

Annie was keeping her plans close to her chest, every time I asked where she intended to take me, she quipped, ‘that’s for me to know and you to find out.’

‘You can’t say that that’s my catchphrase.’ Annie just laughed. The jokes flowed fast and furious, ‘It’s not a 7 – Eleven restaurant, is it? Something that is nice, quiet, romantic and cheap.’

‘You’ll have to wait and find out, but bring some money along with you.’

As I was getting ready for work when Annie received a text message regarding the fact that the person who was staying in her apartment was going to delay payment for a few days, this just added to the joke.

‘Oh, you can’t afford to take me out now. So, that’s the reason why you want me to take some money along with me.’ Annie laughed at me sentiments.

‘What are you on about, you’ve never been rich – we went through this the other day, remember. I told you that if I had known this seven years ago I wouldn’t have married you.’ Again, we cracked up in laughter. ‘Don’t worry I’ll contact my cycling friend, so I’ll go off cycling this evening OK.’

‘I am taking you to the Banyan Tree. I came here many years ago, just after I had graduated. Then I was very green as to what to expect.’

‘So, you’ve been here before?’

‘Yes, this was one of the first places to have a sky lounge restaurant. You’ll like it if it’s open.’

Once off the train, Annie had difficulty getting her bearings. Thankfully, the rain kept off, but every now and then you could fell the odd raindrop coming down. Eventually, we found the rather odd looking place, certainly different as architecture goes.

As we walked towards the reception we were greeted by what looked like an Olympic type flame. Then once inside a musical trio greeted us. 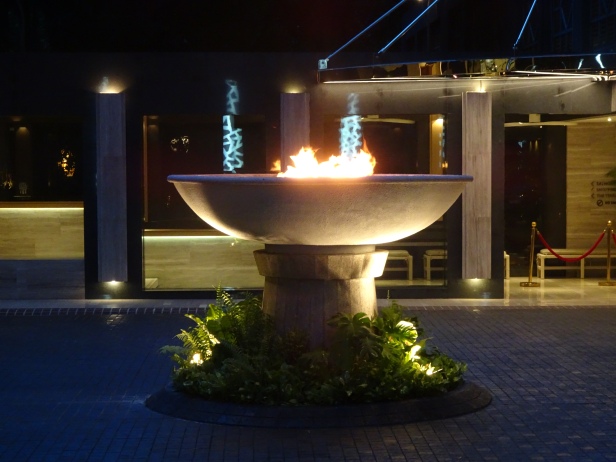 We entered the lift. The lift doors shut and then we set off vertically like a rocket. The lift walls were plastered with adverts of the Vertigo Restaurant, I’d seen pictures of this in many of the tour guidebooks, although then I paid little if no attention to them.

We entered a restaurant but not the one on the rooftop. The restaurant was dark, panelled out in black. It seemed a strange place, the décor seemed rather strange, not really good for my eyes. Thankfully the menus were all illuminated, I’d never seen anything like this before. We ordered our drinks and meal and then admired the views of drenched down Bangkok, there seemed to be no let up in the weather.

Annie was very apologetic regarding the rain, but there was nothing we could do about it, except attempt to admire it as it obscured the views as it blurred the view from the window. The rain ran down in crazy lines merging frantically as it went leaving trails that seemed to glow with the outside lights. The view of the drenching Lumpini district and the surrounding areas weren’t really appealing, certainly not romantic. The little light that illuminated the restaurant came mainly from the fire water bubble walls, which illuminated sapphire blue, which just added to the dark contrast of the interior.

Annie was desperate for the rain to stop, so as that I could impress me with the al fresco rooftop experience 61 floors up. When it seemed to have stopped raining she asked the waitress.

‘As the rain stopped yet?’

‘No, it hasn’t, last night it was eleven o’clock by the time we opened up upstairs.’ Annie, wishes had been dashed.

To eat I had Australian beef, with chips, and asparagus while Annie had scallops. To drink I kept to my Heineken, while Annie enjoyed a couple of cocktails. The staff here were very professional’ talk about the warmth and authentic service.   Towards the back end of my meal the waiting staff came up to me with a small cake with a candle burning on top and they gave me their rendition of ‘Happy Birthday,’ It was such a joyful occasion and such a finishing touch to a wonderful evening regardless of the weather outside.

After dinner, we went down to one of the lower floors and ventured outside to where a bar awaited us.

‘I don’t know why they have this part open but the rooftop closed?’

From here you could marvel at the city around you. The rain had stopped so that gave rise to some rather good shots of the city’s buildings with their lights looking more like tiny pixel glowing in the dark. Bangkok now boasted in having more high raised buildings than London and Toronto and with many more scheduled to be built. Growing vertically seems to be on the up in this city that its Thai name means ‘City of Angels.’