Cycling for me as well as for millions around the world is passion. A day doesn’t go by without me going out on my bike, whether it is the 27km cycle into work, or whether its more of a relaxing cycling jaunt around the province of Nonthaburi in Thailand.

Today was Macha Bucha Day, which meant that it was a public holiday, so, our adventure for my wife and I was to drive to Suvarnabhumi Airport, and the enjoy the recently opened ‘Happy and Healthy Bike Lanes,’ a bit of a mouthful, especially when most cycle enthusiasts still refer to its old name of, ‘Sky Lanes.’

Sky Lanes, was closed down a few years ago for redevelopment. Then it just comprised of a single track. The name Sky Lanes disappeared being replaced its present name of Happy and Healthy Bike Lanes and were reopened on Friday 23 November, by King Rama X. It is hoped that this recent development will put this cycle track amongst the best cycle tracks in the world, but only time will tell.

We set off from Nonthaburi and skirted around the ring road at speed. It took us a good hour to get there. On our arrival, the majority of the cyclists had had enough for one day, especially with the crystal blue skies at their peak, and the unrelenting sun beaming down upon us. Yes, it was around 10am. For many of these cyclists, they had probably arrived when it opened at 6am, but for us that would have meant getting up at 4pm and interrupting my sleeping pattern.

First impressions of the place were that it was a vast improvement on the facilities of old Sky Lanes. It all looked new and exciting, there were many cyclists around, proving that the place was a success, even though in most case they were packing up to go home.

We got ready to cycle around the airport, but to my displeasure, they did not allow medium-sized rucksacks onto the course, nor would they allow us to take cameras onto the cycle route, but mobiles were ok, and so it seemed were cameras fastened to helmets.

Before going onto the route, we had to obtain a snap watch to operate the barriers, without that we couldn’t gain access to it.

There were one of five turn styles to go through before entering onto the course. Once on the course, we were free to cycle as fast as we wanted with the knowledge that there wouldn’t be any restrictions to our cycle. Designated markings on the cycle track showed how far we’d cycled, we knew we had a distance of 23.5km to cycle.

The only noise came from the different roars of aircraft taking off, the bigger ones making the most noise as their thrust went into overdrive.

Annie, I knew, would be happier cycling here than on the busy Thai roads, which were still one of the most dangerous in the world. Thankfully, the roads of Nanthaburi were not as busy as those in Bangkok province.

In one part of our cycle, the airport rail link passed over our course. We seemed to have to wait for ages before we got an appropriate photograph.

At one point Annie really cycled hard, ‘I’ve just clocked 32km/h. That’s the fastest I’ve ever cycled.’ When she saw the video of her efforts she said, I don’t look to be going fast.’ ‘I know because you weren’t. I normally do that casually. I used to get up to speeds of over 70km/h, but not any more.’

The BTS, Sky Train, heading to the airport.

One of the main attractions, of course, was watching the various aircraft coming into land and taking off. That of course depended upon where you were. Attempting to take photographs of moving aircraft with a mobile phone is undoubtedly tricky, especially if it’s into the sun.

The weather at least was good for us, in that we had a little cloud cover, but the temperature was still very hot. From the time we started cycling, only four cyclists passed us. Most of the cycling had been done before we arrived when it was cooler, and no doubt it would get busier later on in the late afternoon when it got cooler again, the old saying of ‘Mad dogs and English men,’ came to mind.

On our cycle, we saw the early construction stages of terminal 2. Something that Suvarnabhumi Airport has been crying out for, for ages to help solve the problem of congestion of Asia’s 11th busiest airport.

We had enjoyed ourselves cycling around the airport. I think most cyclists do. I think it would be great to cycle here at dusk, in a communal group, with cycle lights ablaze, if just to experience the gossip and banter that comes with such an occasion. It is just a pity that Thailand, like so many countries, lack facilities like this on a larger scale, as I am sure it would make cycling much more pleasurable and popular. 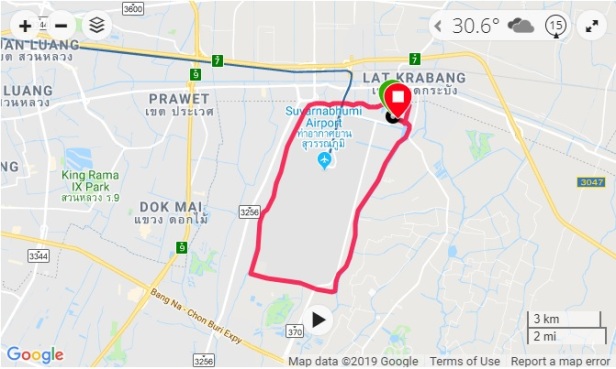