Tuesday, 16 July 2019, was Asala, Dharma Day. An important day in the Buddhist Callender.  Annie and I were initially going head out for Chachoengsao province and cycle around the fabulous Wat Sothorn temple, but because it was a religious day and traffic would be heavy, so we decided to head for Kasetsart University, Kamphaeng Saen Campus in the province of Nakhon Pathom.

On arriving at Kasetsart University, after over an hour drive, we first cycled around the campus, before heading out.

An old tractor, certainly not from David Browns Tractors of Huddersfield.

This was our adventure for the day, and like any adventure, we had decided not to little if any research. We didn’t even know if the university car parks would be open, but they were, well, one was near at veterinary surgery.

Without the aid of a map, we set off. Maybe, we just picked the wrong direction as we headed straight towards a methane and gas firm, energy for the future. As you could imagine, there was a strange smell. Behind that, there was a colossal refuse tip that looked more like a pyramid in the making. It looked like the rubbish had been compacted and then covered with soil, but by the look of things, the rains had washed the dirt away, leaving the debris exposed to the open air. We cycled alongside the nearby khlong. Where it went was anybody’s guess?

Our intrepid cycle took us along roads where the local sugar plantations penned us in on both sides. If it wasn’t sugarcane then it was rice. There was a strange green-roofed complex in the vicinity, with multiple green roofs. It looked like a temple complex from a distance but when we got near it, it looked more like a holiday resort with a multitude of green-roofed chalets scattered all over. There was the Buddha mantra being played from within but there was also quite a number of cars too. As we couldn’t gain access we cycled off.

Having been up since 6am, we both started to get hungry, even though it wasn’t even noon. We cycled passed what we considered to be the only eating place within the vicinity. The lady of the eating place was delighted we had chosen her place. As we discovered, this was her first day of trading and we were her first customer of the day. She hugged us both for making her day. I don’t think she could have thanked us enough. To me, she was a little over the top, but we’d made her day.

After our early lunch, we cycled around. We decided to head out for the nearby temple complex at Wat Thung Kra Phang Hom. We could see this on the distant horizon. From where we were it looked slightly Burmese, but of arriving there, we realised that they were constructing a large Buddha. The Buddha statue was all up in scaffolding, looking grey, waiting to be completed and painted.

After leaving the temple behind, we cycled on, following the railway. We presumed it was the line to Kanchanaburi. Sugarcane was obviously the main crop being grown here. There were fields after fields of the stuff. Good job if you’ve a sweet tooth. It was around here we stumbled across a shepherd, herding his dairy cattle. Milk, I knew from the research I carried out, I discovered that Thailand was only able to produce 45% of its own needs, rest came from imported milk powder.

Our cycle endeavours continued, excited to try any small road, wondering where it would lead us to. In many cases, these were the most revealing parts of our excursions. We came across monitor lizards, butterflies by there thousands. We met up with another Khlong, this was the Liap Khlong Chonlaprathan Alley. It meandered it’s away through the stunning countryside. In my attempt to catch up with Annie, I was confronted by sheep on the road. There must have been over a hundred of them. Annie, I bet was in her element, being a lover of sheep. Never in a month of Sundays did I expect to come across sheep. I attempted to take a photograph of Annie with them, but they were too spaced out, and Annie was right at the other side of them.

We eventually got bored of this road, so we decided to take a detour. Want I just glad that Annie was with me. At least I wouldn’t get lost. We cycled onto the 4058 road. This led us to another stunningly, beautiful temple. This was Wat Phai Ruen Rom. The temple buildings were immaculately clean, but to Annie’s annoyance, the temple was all locked up, preventing her from pay respect to Lord Buddha.

We took photos and then continued. We were aware that there was a military flying school nearby, so that became our next destination. I eagerly wanted to take photographs of the entrance but wasn’t too sure if the security would be sensitive to that. I got Annie to request permission, which we got granted. Better still, we got invited in and allowed to cycle allowed. ‘This would not be allowed in a British Air Base.’ I commented. We were told that the cycle route was 21 km long. Taking advantage of the occasion we cycle on, taking pictures at will of aircraft on display. Obviously, their flying days had come to an end.

Eventually, I cycled around a bend to be confronted by an army officer with what looked like an automatic machine gun.

Don’t mess with people with guns, especially those who don’t look amused.

Annie went to negotiate with him, but it was evident that he wasn’t going to let us through. ‘The cycle route is open from 3pm until 6pm. You’ll have to come back later.’ This was going to be a too-long to wait for us, especially with it being just after 2pm.

We decided to head back to Kasetsart University. That in its own was going to be a long journey, especially when we were 23km away. We found a much shorter route and were happy to get back. The front of my legs were red with sunburn. 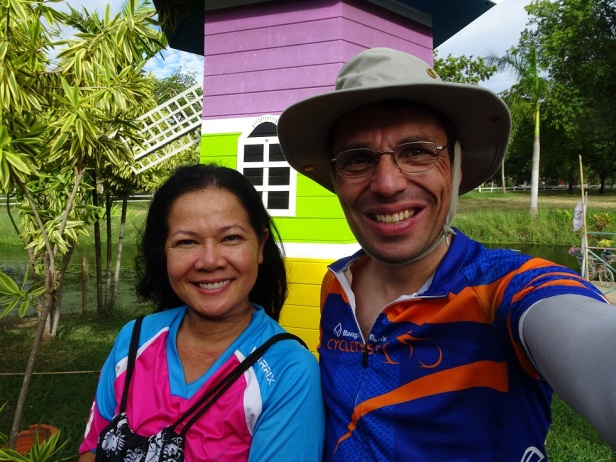 Me at Max Beef

Once in the car, Annie spotted a delightful looking bird, foraging in the grass. I’d certainly never seen anything like it before. We took photographs of it, intrigued to see what we’d discovered. According to our research, it was a Eurasian Hoopoe bird – a rare visitor to Thailand. As far as our cycling had gone, well, we’d cycled 60km in blistering heat.

Another bird we saw on our cycle. An Asian Golden Weaver 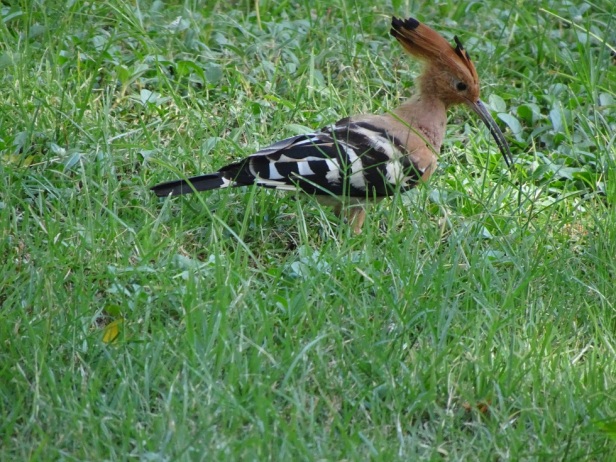