We, that is Annie my girlfriend and I had agreed to tour around Sa-Kaew province, which was sandwiched between the mountain ranges of San Kamphaeng and the Dangrek ones to the north and the Caramens to the south.

It took us six hours to drive the 280km, to save time we headed for the Pang Sida National Park, as our first tourist attraction. The road through the park was nothing more than a dust track, which created clouds of choking dust as vehicles went passed.

We reached the one on the high peaks that overlooked the wide expanse of the forest. Bleach white trees were scattered in and amongst the rubber and fig trees, the view was breath-taking.

On our way back, we saw evidence that wild elephants had been on the rampage through the undergrowth: flattened trees and elephant droppings were among the obvious tell-tale signs, but we saw nothing.

We decided while we were in the vicinity that we’d have a look at the Pangsida Waterfall, but when we arrived we discovered that they’d run dry. I bet the Victoria Falls never does.

We were staying at the Burapa Pat Resort for the first night of our short break, which was some 30km away from the Cambodian border. It was rather quiet where we were staying.

‘They must have known we were coming.’ I said jokingly.

Our beds were firm with pillows that were rock solid, but the place itself was nice.

The next day we were woken by a choir of cicada insects, they were certainly getting excited about something. Today we set off to find the Khmer temple complex of the Sdok Kok Thom, one of the many magical wonders of Thailand, which you have to witness to believe.

On our way, we called into a garage to fill up with petrol and to buy refreshments for our journey. Annie stayed in the car while I went to procure supplies, but the queue was horrendous. I was tired, to begin with, and the queuing didn’t help. Afterwards, I went back outside, I’d been ages in the shop and another car had parked next to ours. I opened the door of the car.

‘Surprise! I’m ba… Oh! I’m so sorry.’ Foolishly I’d approached the wrong car without realizing and opened the door. The driver looked mortified by my sudden appearance. She’d certainly not been expecting to see me. Annie had to apologize profoundly to her in Thai. Thankfully, she saw the funny side to it all, but I was more embarrassed than anything.

‘So, you found her more attractive than I did you?’ Annie asked.

‘Yes, why not, a change is as good as a rest, so they say.’ I quipped. ‘Poor woman, I nearly made her dreams come true. What would you have done if she had driven off with me?’

‘I’d have let her get on with it.’ Annie retorted chuckling to herself.

We eventually found the magnificent Sadok Kok Thom Temple complex, a dedication to the Hindu God Shiva – the God of Yogis. It looked in parts like the Angkor Wat Temple complex in Cambodia.

We walked along a progressive walkway, which was flanked by mini pillars at both sides. The outer gopura led us into the inner sanctuaries. It was a magnificent looking structure.

From here we went over to La Lu in Ban Khlong, which was like looking for a needle in a haystack. On arriving we transferred to a two-wheeled tractor (a rodthai), which took us to the tourist attraction.

It was a rather spooky place, a baron and desolate looking area, akin to a miniature Grand Canyon, but these structures had been created recently and were actually made of soft sediment, the remnants of a recently cleared forest for the purpose of agriculture, which had evidently gone badly wrong. As a result, the monsoon rains had eroded the fragile soil away, leaving haunting looking stacks and pillars of various shapes and sizes.

From a distance, it looked like a natural wonder, but in reality, it was nothing more than a man-made disaster caused by deforestation.

On our way back we followed a motorcyclist, along the single lane carriageway through the nearby forest. The road was too dangerous to overtake, so we hung back, giving him the distance. Then suddenly he slowed down and requested us to do likewise. At first, we had no idea what was going on, it seemed strange as to what he was doing. His attention was transfixed on something ahead of him, then suddenly we realized why he’d stopped. A four-foot-long black snake slithered across the road in front of us. Annie let out half a scream, but as far as I was concerned, it was nothing to get startled about, just nature going about its business.

We eventually we arrived at Aranyaprathet, where we stayed for the night at the La Villa Boutique Hotel, 6km from the Cambodian border. Thankfully, their beds had soft pillows.

The following day, we decided that we’d cycle to Cambodia, this meant passing through the Aranyaprathet crossing. As we cycled towards this point, we passed the shabby looking Hitz Hotel, which I nicknamed the ‘Ritz’ and I promptly starting singing Fred Astaire’s ‘Putting on the Ritz.’ Knowing quite well what Annie’s response was going to be.

‘Should I?’ was her amusing reply.

After obtaining my visa and return visa, we set off. The paperwork and directions had been rather confusing, to say the least.

The Aranyaprathet crossing was known in Cambodians as Krung Poi Pet, this was now behind us as we cycled into this strange foreign land of Cambodia. A fancy temple complex greeted us as we headed in the direction of Poipet 5km away, then we headed out towards Malai, which was more challenging at 30km away as we cycled in this oppressive heat. 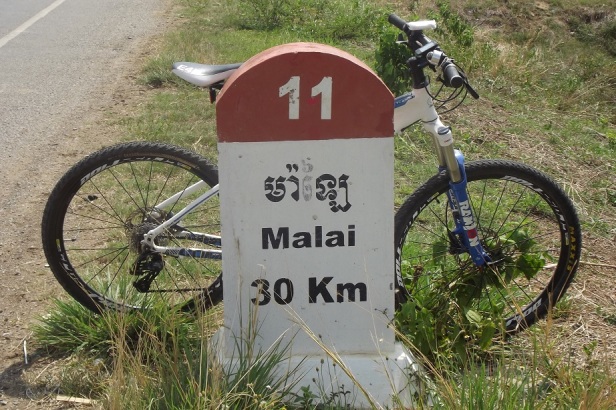 Bicycle on the way to Malai

‘This road is boring, there’s nothing to see here except ghost-like villages and baking fields.’ Annie said complaining.

‘You moan too much, think of the exercise that you’re getting.’

‘You’re just lazy and you won’t admit to it.’

We eventually headed back to the border, Annie was resentful of the pitiless blue sky. She was right on that account, it was far too hot to be out cycling, maybe I was just a die-hard crazy cyclist. Everywhere we looked was tinder dry and struggling for survival.

We had spent around three hours in Cambodia by the time we arrived back at the border point.

If nothing else, nobody can deny that we actually cycled to Cambodia, even if it was only a few kilometres down the road, but it still sounds impressive.

This had been a happy and eventful few days away from hectic Bangkok, at least the air was cleaner here.