Mae Hong Son, as a cycle holiday destination, was literally picked out at random. It had an airport, to which I concluded that there must be something of interest there. Apart from the obvious mountainous terrain that bordered Myanmar (Burma). I knew very little about the place except that it was tucked away up in the north-west corner of Thailand.

Mae Hong Son sprang up in 1831 as an elephant training camp, only being linked to Chiang Mai in 1965.

I considered that the less I knew about the place, the more interesting my cycle escapades would become. Nothing like cycling into unknown territory.

I was staying at a lovely quiet resort called the ‘Golden Pai Resort,’ next to the River Pai. It was quiet mainly because I was the only tourist staying there. 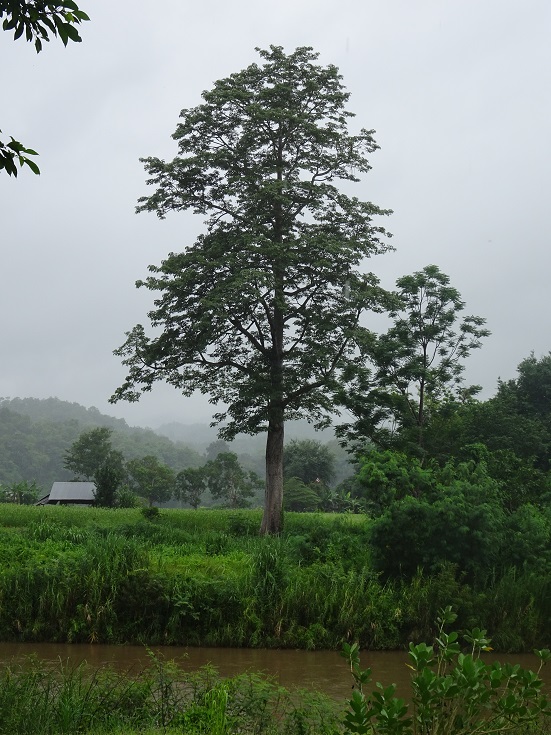 The view from the restaurant, mountains, rice fields and the River Pai

My cycle plane was to cover as much ground as possible. I had literally two main roads to explore: the 1095 and the 108. The only other road was the 128, that formed a by-pass around the town, but there were scores of roads branching off that led off in all directions, many of which would take me up into the neighbouring mountains through Hmoong villages and hill tribes like the Karen people.

The 1095 road headed north, basically, a mountain road with breathtaking views of the numerous lush, verdant, winding and contorted valleys, through which stunning landscapes and vistas of which the province of Mae Hong Son could be seen. It was claimed that between Mae Hong Son and the town of Pai, that there were 1864 curves in the road, but with my capabilities, there was no way that I was prepared to step up to the challenge of counting them. It was 110km from Mae Hong Son to Pai and it was all up and down.

The 1095 road had paddy fields at the bottom and beautiful looking temple complexes hidden in and among the forest, like the Wat Huaipha. The forest lined much of the escarpments, to which the road seemed snaked through. Some of the mountains had vertiginous drops to the valley below.

With it being the rainy season, the low cloud seemed to haunt the mountain peaks, dropping down just before the torrential rain seemed to start, giving the place a damp eerie feel to it, which was made worse by the fact that the traffic passing through was negligible.

Even though the area had a more of a temperate feel to it, I didn’t half sweat on those hill climbs. There were many 17% and even 18% ascents, I must have been completely insane to attempt those at my age. There were just the butterflies and dragonflies that came out to greet me and they didn’t hang around for too long.

After 30 km, I was in danger of running out of water, becoming dehydrated was the last thing I needed. At least the way back it was mostly downhill.

Another day I decided to try out a more easterly cycle. This meant cycling again up into the mountains, encountering the same terrain as the previous days. Fast flowing rivulets, ran down the mountainsides after the morning’s rain, following a sinuous trail. At times, crisscrossing the road. Arduously, I cycled on, on my impromptu cycle, pushing down on my pedals and pulling up on my handlebars, anything to literally get more leverage, but most of the time it was no good. The natural topography was far too challenging for me and with the sun becoming to coming out, the temperatures would only begin to climb. I rested more times than I’d care to remember, sweat trickled down my face, down my back and my jersey was soaked. My only motivation seemed to come when I heard a motorist coming from behind. I didn’t want them to think that I’d been defeated by the mountain roads – when virtually I had.

Eventually, I took a side road. This led me up through small rundown villages with shacks and hovels. Children watched me from a bridge as I cycled through. They were probably wondering what had hit town. I’m sure cyclists didn’t wander through this place that frequently.

The road was good at first, but later it descending into nothing more than a dirt track. Now I was intrigued to see where it went; if anywhere. The Myanmar border was calling out to me, just around the corner, as my curiosity was driving me on regardless of the perils that I might face. The further I cycled, the more compelling it seemed to become, on this rather captivating odyssey.

I was now somewhere in the middle of nowhere, out of range of civilization as I knew it. I don’t think the search and rescue parties came out this far. The dirt track had no doubt been gouged out by illegal crossings, smugglers and bandits. The silence of a faint breeze was strangely an eerie one, but the views across mountains landscape were ravishing beautiful. On a bend, I could see trees standing there motionless, with their entangled, gnarled roots exposed to the elements, balancing precariously at the edge of a precipitous cliff.

I couldn’t resist taking photographs, but while I did, I suddenly heard talking and it was far too close for comfort. Quickly, I grappled with my bike and camera, but it was too late. Coming into view were two rather smartly dressed travellers, with a radio on loud. They looked suspicious and rather conspicuous as one of them made conversation with me. Afterwards, I decided that I had gone beyond my limits, I didn’t want to become another missing statistic on the missing person list, certainly not in this disconcerting environment.

Mae Hong Son, in essence, is an attractive place to cycle around. It certainly has interesting temples and views. A clean vibrant town, with lots to see and do. The only problem for me was that it was missing the most fundamental element for a cyclist and that was a good bicycle shop, which it seemed to be completely devoid of.