As if from out of the blue and for something to do, I came up with the great idea of going off for a cycling weekend. Originally, I suggested on going to Cha-am, in Phetchaburi, but eventually, we settled for Sam Roi Yot, which is in the next province south, Prachuap Khiri Khan. 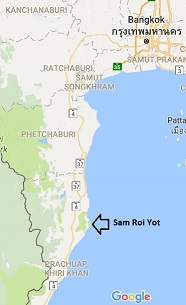 The coming weekend was going to be Mother’s Day here in Thailand. We knew that the roads would be busy, so we set off in earnest if only to get a head start, but we eventually hit gridlock somewhere between Samut Sakhon and Samut Songkram. In total, it took us the best part of seven hours to drive the distance of 235.3 km, a route that should have taken only three hours and twelve minutes.

Sam Roi Yot has a forest of the same name (Khao Sam Roi Yot), which means a mountain range of three hundred peaks. The terrain consists mostly of limestone, which makes for some fantastic rugged scenery with all its cliffs and hidden caves.

To kill the boredom, I introduced my wife to a new British phrase, which seemed to be fitting for that moment in time to say that we intended to go off cycling. ‘On your bike!’ She found the saying rather amusing, to say the least, once she knew what it meant.

‘On your bike! She kept on reciting.’

Even though I’d been to this part of Thailand before on two previous occasions, Annie seemed to know the layout somewhat better than I did. We had set off without organizing any accommodation, creating a rather risk scenario.

‘It’ll be all booked up with it being a bank holiday weekend.’ I exclaimed.

‘No, it won’t, trust me. Thais don’t like going to the coast during the rainy season, they  much prefer to return to their villages instead; to be with their families.’

‘I’ll believe you – thousands wouldn’t.’ I wasn’t happy with the arrangements, but she knew Thai culture better than I did. And surprise, surprise, we had no difficulty finding accommodation, although it wasn’t exactly the Dorchester Hotel. A coconut plantation was to the rear of our accommodation.

We were about fifty metres from the beach, which was quiet and pristine. Because of the time we had arrived, we decided on going for a short stroll along the beach, rather than going off cycling; that would have to wait until tomorrow.

Some distance out to sea, as if at anchorage were a scattering of islands, all turned-out in their jungle best looking all smug and verdant, being isolated from the tourist trade.

Dinner was taken at my favourite fish restaurant down here, the ‘Chomtalay Restaurant.’ Where we splashed out on two fish dishes, and red wine in this rather opulent looking restaurant. This was the same place where I nearly lost my camera the first time I came here with Annie and my sister when she came over here to pay me a visit.

The following day we went cycling along the front first. We ended up having a late breakfast; brunch I suppose you could have called it. Our cycle escapade took us out to Pran Buri. Annie pointed out the places where we had stayed before. We cycled a total of 55km, taking it easy, enjoying the scenery and taking photographs as we went.

Pran Buri is sometimes referred to as the ‘Thai Riviera.’ Along the back coastal road we cycled, past guest houses and hotels as we went. Realizing that this could have been our alternative accommodation, if only we had planned it a bit better. Those that had the private swimming pools, seemed to have fared much better than those that didn’t with the seldom seen tourists that were here.

Further on we came across fishing villages and secluded harbours. Their catch already drying out in the sun, on the squid drying racks. The beaches in Pran Buri are sometimes known as Pak Nam Pran (mouth of the Pranburi River).

Later, we cycled out towards the rockier parts. The mountain ranges made up the horizon now, with their forests of dark luxuriant foliage, looking wild and rampant, for all to see. The foreground in parts had been turned over for agriculture, there grew luscious pineapple plots. Wildflowers grew along the roadside, catching my wife’s attention as she experimented with her camera. I joked with her. 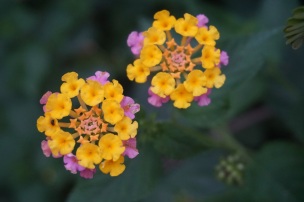 ‘These flowers are so wonderful, they remind me of,’ there was a distinct pause in her flow of words.

‘Me,’ I said interjecting appealingly. Annie gave me one of her comical glace as we shared a laugh together. I’d obviously interrupted her thought process.

As late afternoon crept in, we strolled along the beach admiring the ravishing landscape. A group of young girls around their early teens attempted to make conversation with me, but my Thai language skill was not up to it. Annie ended up having to interpret for me. Our walk took us much further than I had originally envisaged, considering that we hadn’t had any lunch, but it was interesting to see the boats in a small harbour being preparing in going out to sea again, squid no doubt being on the menu for tomorrows breakfast. 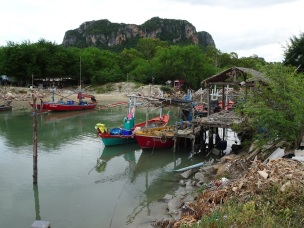 The sunset helped to silhouette the mountainous environs to the west, creating an ambience of kaleidoscopic, transformation to the evening sky, with exotic overtones.

Dinner was taken later, at the same place as yesterday – the Chomtalay Restaurant, but today our appetite was yearning excitedly to savour the same mouth-watering succulent fish as yesterday. No doubt, the restaurant would demonstrate its art of gastronomy yet again. The fish just melted in one’s mouths, after being garnished with garlic and coriander. Red wine would only assist in putting the finishing touches on what had been an interesting weekend. 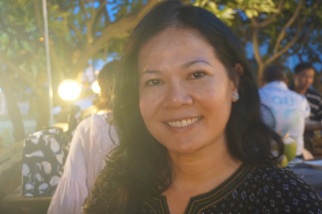 ‘Have you enjoyed this cycling weekend?’ I asked.

‘Yes, yesterday was tiring owing to all the travelling and I can’t sleep on a flat pillow. The cycling today has been enjoyable. Have you enjoyed it?

‘Yes, I love getting away from the Bangkok sprawl: the traffic, pollution and the headaches.

‘The meal tastes better than yesterday, don’t you think?’ My wife, as the wine started to take advantage of her senses.

‘Yes, these restaurant meals are fantastic. I thought that the very first time I sampled the food here. Do you know what I like most about this meal?’

‘That you promised to pay for it.’ I said joking with her, but her resounding response was.

‘On your bike!’ To that, we shared a laugh as our weekend started to slowly come to an end.